"WITH LIBERTY AND JUSTICE FOR SOME"


NOTE:  Boundless gr​atitude for those compassionate and understanding loyal patients
who both witnessed and patiently supported the office throughout it all.
January 1, 2018-2020

I had been reluctant to release the following narrative.  However, as I recounted my "real life horror movie"
throughout the many months of living it and the several years following it, persons were appalled but not
surprised.  Some persons even shared incidences that they heard of which were not as daunting or as long
as mine, but unbelievably inexcusable just the same.  Episodes of exploitation and overreach by authorities
​               are all over the news, but there are episodes hidden closer to home.

I have concluded it to be important enough to expose my true story to light.  How bad does it have to get for
people to stop shrinking from fear and start speaking out with the truth?  How bad does it have to get before
people face reality in this nation, and stop finding excuses for sitting in their irresponsibility?  It is not even a
matter of our "privacy" rights being at stake now.  It already has become a matter of our rights for health and
safety, which are increasingly at the mercy of authorities and "professionals" less concerned with citizens'
rights than their own agendas.

The following account should serve as a warning that government agencies have already dangerously over-                           stepped into the arena of healthcare, where they do not belong and and are not competent.  Anyone less
trained than a professional physician should not be entrusted with a person's definitive diagnosis--much
less guess at it--least of all act on it.  Such pretension is extremely dangerous, especially if there is neither
motivation nor responsibility for searching, pursuing and following-up on the true facts! 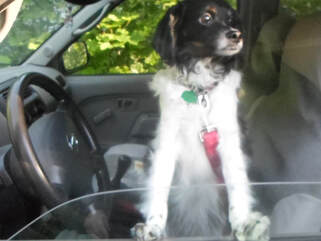 ' Hold on tight!--full-speed ahead & "paws"-itive power! '
If this effort had been a purely "personal" story, I would not have bothered
putting myself out here.  However, every aspect of my professional career
had been assaulted.  Being "stalked" included repeated tamperings with my
dental office-building, almost crippling my ability to physically practice on
the premises.  And when I sought protection, there was less concern about
facts, truth, my safety and possibly causing a wrongful professional assas-
sination, than about self-serving priorities and covering "cracks".

Virtually no player in this whole nightmarish drama showed empathy, much
less the strength of a humble conscience.  There never was "innocent-
before proven-guilty" and essentially no "respect".  Neither "forgive me"
nor "we were wrong" has ever been uttered by anyone since it all.  The
art of self-correction for your neighbor's sake has definitely been re-
placed by the stench of self-righteous pride and control.  It seems to me   that this "gotcha" & "never-admit-wrong" mentality is a great contributor   to the declining compassion and morals in our culture.

In any event--because I dare to believe I still have freedom-of-speech in this country, I believe it is of utmost importance   to reveal this very small portion of my saga.  After all, this is the "home-of-the-brave"---so let's be courageous, and here   goes!   (* Update below 5-2018!!!)

Just the Normal Event of Things?

​The following brief narrative, which contains only a few of many unpredictable events, will clarify why this dental
office was voluntarily maintained as a protective-limited-business for several years.  After much consideration and
deliberation whether or not to relocate this office, the decision was made to fully reopen and revive the practice
​    just where it stands.

In reality, it proved pointless to consider moving because the events encountered are nation-wide problems---
problems which will grow and not go away in the near future.  "Blowing-off" such instances without reporting them
only perpetuates the risks to all.   Actually they should be fully addressed.  But for now, just in case there are any
damaging false-accusations floating around on or off the internet, the following brief narrative should dispel any
slanderous-rumors or evil-exaggerations made in ignorance of the facts & truth.
​
CLICK for more on "STALKING"---National Violence Against Women Prevention Research Center---University of Missouri
​   *  Update 5-2018!!       A video camera has finally been placed in the southwest corner of the building sometime
Re: see page 2!!      in April or May 2018!!  Previously, this corner was the only corner of the building that had
no camera.  This location is where the ambulance was brought in--and there had only been
dangling wires there until this year!!!  Hopefully, it's an "operable" camera!!!