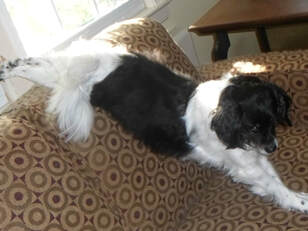 ' Jumping to conclusions can land you barking up the wrong tree '
To this day years later, with much rumination and soul-searching, it still is
incomprehensible to me that so many levels of authority and peoples were
made aware of these issues---yet there has been no response in any form
for the public's health and safety from any one or any agency's department!

On another note, one lesson from this debacle:  Supporting local small-
business-owners should include having them feel safe in seeking help and
protection from the local town agencies they pay for.

' In reality, I'm the hero in this saga! I guided the way back, and gave my whole heart & "MUSCLES"-power without a word. '
All I know for sure is this.  I did not have to go to war to experience injustice and
horror--I experienced it right here at home.  And I do not have to concern myself
with "non-americanized" terrorists--I already have been doubly-terrorized and
doubly-betrayed by my own fellow countrymen.
​
It appears that "stalker" and "protector" have become almost indistinguishable,     neither concerned with "honorable-conduct" nor "content-of-character".
What ever happened to the importance of righteousness and virtue?.....
How about showing ANY kind of strength in character & soul?

I have had to greatly revamp expectations of my fellow countrymen over & over
& over again throughout these past years!!  If there are no consequences for the   vandalizing stalker who terrorizes by "stalking"---and there are no consequences   for the protectors who cause more harm by not "protecting & helping"---is it
no wonder that our nation is in the condition it's in?!

How can a society expect to stand for truth and justice if "bulliers" are not held accountable for acknowledging and   amending their indiscretions?!  And when have persons in this country become so lame and weak as to not own up
to their mistakes and actions?!  Where's the ownership and compassion for mistakes made against one's fellowman?!

It amazes me that our nation's people want to live in a nation which stands for truth and justice,
with civil rights and freedoms, but individually don't rally when injustice is witnessed.  It does
no good to just offer judgments or opinions, or expect the offended to just "get-over-it and move-on",
or "wake-up", or "get-above" themselves.  Voicing judgments and opinions is just a "lazy" way of doing
nothing.

And certainly it does no good to turn or run away from injustice as if it doesn't exist--or to "cower"
from the awful mistakes made at someone else's expense--or to look away, hoping the whole problem
"will just go away".

When have adults in this nation become this complicit?!  Being weak and denying the wrongs of
this country, did not build this country.  Being a coward is not the way to build civility, maturity,
professionalism and wisdom!
​
If incidences are not brought to light or acknowledged or learned from, the errors are silently
condoned.  The deeds become doomed to be repeated, undermining the nation's values and
principles all the more.  Eventually trust and belief in them are eroded altogether!
More Pondering and Thinking

Also consider---
​          "Truth" should not be "relative", or "subject-to-opinion", or fickle.
"Truth" should be universally understood for it's irrefutable value, and be upheld by all!

If the truth is only a personal "self-serving" opinion or fabrication, there can be no "common-unifying" truth
to base justice on.  In other words, truth should not be "relative" to each individual because there would not
be a "universal" understanding of what truth would be.  In such a case, justice also would become just another
individual opinion--and no one would be on the same wavelength!  Whose "justice" would be followed?

BACK to PAGE-3 CONTENTS
CLICK for more on "STALKING"---National Violence Against Women Prevention Research Center---University of Missouri
​   *  Update 5-2018!!       A video camera has finally been placed in the southwest corner of the building sometime
Re: see page 2!!      in April or May 2018!!  Previously, this corner was the only corner of the building that had
no camera.  This location is where the ambulance was brought in--and there had only been
dangling wires there until this year!!!  Hopefully, it's an "operable" camera!!!

© Copyright 2022.  All Rights Reserved by Carol Lee Skerpan, DMD
© Images in this website are protected by copyright & may not be downloaded,
republished, retransmitted, reproduced or otherwise used as a stand-alone file.
UA-112758750-1